The Glock is a series of semi-automatic pistols that are designed and produced by Austrian manufacturer Glock Ges.m.b.H.

It is known for its unique polymer frame, short recoil, and their trademark “safe action” safety system. It was the top performer in the reliability and safety tests and thus entered the Austrian military and police service in 1982.

Due to the huge popularity of the Glock semi-automatic pistols, they are used by all sorts of characters for all sorts of reasons.

If you read thriller novels, you can probably remember times when a character in a story turned off the safety in a Glock semi-automatic pistol. Well, the writers didn’t do their research properly as you can’t turn the safety off in a Glock.

So, does it mean that the Glocks have no safeties? Well, not really. Despite being famous for their simplicity, 99% of the Glock handguns use three safety mechanisms.

The safeties included in a Glock handgun are trigger safety, drop safety, pistol safety and firing pin safety, fingerprint gun lock safety. None of them can be switched off at any point by any characters.

The Glock had some reliability concerns when it was first released in the market because of the polymer frame. Concerns regarding security also emerged as the polymer frame could, in theory, circumvent the metal detectors in airports.

However, Glocks have made their place as the company’s most profitable line of products in the military, police, and even civilian sectors.

Gun Safety vs. Being Gun Safe

The purpose of gun safety is not to prevent the firing of the gun but rather to prevent accidental discharge.

Misuse of a gun can result in dangerous situations that can often lead to fatal incidents. There are four basic rules that you should always keep in mind before handling or owning a gun.

Why Is Gun Safety Important?

Gun violence in the United States results in tens of thousands of deaths every year, and a large chunk of that comes from accidental discharge of firearms.

This is why it is important for guns to have safety features to reduce the chance of any sorts of accidents. You need to remember that this equipment can be fatal in the wrong hands, so some precautions are always advised.

There are many variants of safety mechanisms available in different types of guns. Some common types include a manual safety, grip safety, drop safety, budget Gun safety etc.

There is also an indicator in most guns to show if a live round is in the gun chamber known as the Loaded Chamber Indicator or LCI in short. Remember that all mechanical devices can fail eventually, and a gun is no exception to that rule.

You should always keep your guns stored in a place not accessible by everyone, especially children. You should not keep them loaded with ammunition under any circumstances.

It is better to have them locked up in a safe away from others. Though almost all modern guns come with some type of safety mechanism, it is recommended not to carry any weapon unless you have proper training.

The Glock semi-automatic pistol is also sometimes referred to as Glock “safe action” pistol due to its three passive safety features.

These features are Trigger safety, Firing pin safety, and Drop safety. These three systems are engaged immediately when the pistol is at rest, which means that any chance of accidental discharge when dropped is eliminated.

We can take a closer look at how each of these safety systems works. 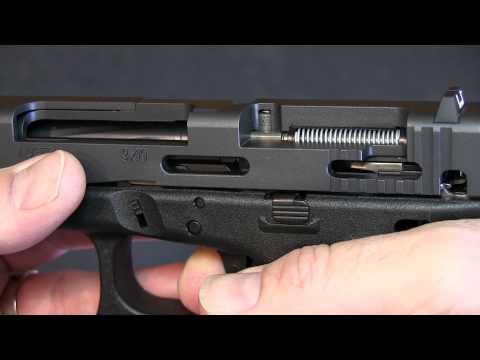 This safety mechanism was made popular by Glock, but it was originally used in 1897 in Iver Johnson Second Model Safety Hammerless revolver. The design of the trigger-security is to thwart the pistol from shooting in case of an accidental drop. Basically, when the trigger is not pressed, the gun deliberately will not fire.

Firing Pin Security hinders the travel path of the firing pin by inserting an automatic block in front of it when the gun is at rest. The mechanical block is directly connected to the trigger machinery. When you let go of the hammer or striker, it clears the obstacle in front of the firing pin.

The firing pin protection in Glock semi-automatic pistols automatically impedes the gunfire pin from proceeding onward in the ready-to-shoot state.

When the trigger in the gun is pulled back, the firing pin security is pushed up by the trigger bar which frees the channel of the gunfire pin. The safety system automatically restarts if you choose not to pull the trigger.

Drop safeties are typically passive securities intended to lessen the possibility of a weapon inadvertently firing when you drop it from your hand or handle it roughly.

Drop safety is a specific requirement in the State of California, along with many other jurisdictions. These types of safeties usually provide some sort of obstacle that is removed only when you pull the trigger.

In the Glock, the trigger bolt, that lies on the protection slope within the trigger machine-covering, occupies the hindmost portion of the shooting pin and stops the firing pin from proceeding forward.

When it comes down to the safety in a firearm, the one holding the gun matters more than the features that come with the gun. Glock, with its many safety features, is not truly safe in the hands of an untrained individual. So, it is important always to be wary of your surroundings when operating a gun, whether it is loaded or not.

Larry is a professional Shooter and his hobby is shooting and Hunting! He has been shooting for the last 6 years and he loves using many types of guns while outing as well. Based experiences with a different type of Guns and Hunting related products. He is sharing his opinion about various Guns so that a beginner can get started right way. Find him on Facebook.
Happy reading!

As an Amazon Associate, I earn from qualifying purchases. Outdoorcoast is a participant in the Amazon Services LLC Associates Program, an affiliate advertising program designed to provide a means for us to earn fees by linking to Amazon.com and affiliated sites.